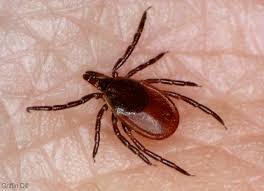 Removing from our persons the first ticks of the season reminds us of the hazards they present—and our strategies for dealing with them.

(The featured photo of an adult deer tick is by Griffin Dill via University of Maine Extension.)

Both The Centers for Disease Control and Prevention and The Rodale Institute agree that ticks dislike woodchips—one reason we encourage Quarry Gardens visitors to stay on the trails. And, indeed, when we stay on the trails, we aren’t troubled by ticks. There are  fresh chips on all the trails, here along the Bern’s Run trail. 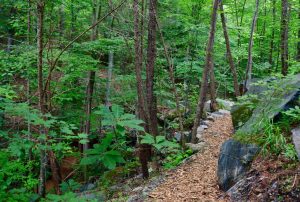 But we who must work in the woods and garden beds can’t  stay on the trails, so we’ve taken Henry Domke’s advice. Henry and his wife Lorna run another mom-and-pop, private-for-the-public botanical garden: The Prairie Garden Trust in Bloomfield MO. Here’s the link to his blog post, which describes his method of tick-proofing garden clothing with Permethrin.

Permethrin is a synthetic version of a chemical produced naturally by the chrysanthemum flower. It is not safe to apply directly to skin. The U.S. military has used permethrin-treated uniforms since the 1990s, and civilian clothing based on the technology has been available since 2003.

It’s helpful to know that ticks don’t fly, hop, run, or even move all that quickly. Depending on the life stage and species, they quest for hosts anywhere from ground level in leaf litter to about knee-high on vegetation, and then tend to crawl up to find a place to bite. I’ve adapted Henry’s method to be a bit easier for me. I mix a .5% solution of permethrin (Sawyer is a brand that comes both pre-mixed in spray bottles or as concentrate), gather our work pants and socks outside, don long rubber gloves, and go to work, saturating pant legs and sock tops with the solution. 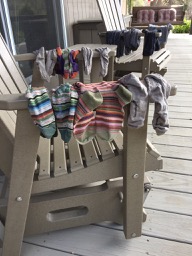 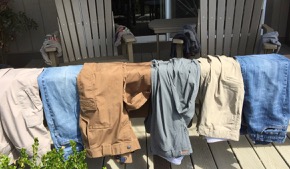 (Caption: Pants on the porch rail, socks on the chair arms. Note that  pant leg bottoms and socks are in the shade—something about sunlight breaking down the Permethrin.]

Last year, I applied the solution as a spray; this year, I mixed a gallon of it in a small bucket and dipped the pant legs and sock tops—much easier. Then I drape the clothes over the outdoor furniture and porch railings and let them dry in the breeze. If I were more concerned about mosquitos and other insects, I would dip the whole garments, as well as spray our hats. I’ll need to repeat the treatment after six weeks or six washings—in late May, and again in July.

It seems to work. In 2015 and 2016, during the prime tick season of May and June, we would sometimes have between us as many as a dozen tick bites at one time. In 2017, after adopting Henry’s method, we had maybe three tick bites between us for the whole season. (When in the woods, we still tuck pant legs into socks.) Judging from its start (half-a-dozen pre-treatment tick bites already in early April), this may be a big year for ticks, so let’s hope it works.

In less frightening news, the official 2018 opening of the Quarry Gardens for individual tours is Friday, April 13. You can skip that one if you are a Triskaidekaphobe, but be warned that over 20 groups have already signed up for tours and many of the individual tour dates are filling up for April and May, so don’t delay if you want to schedule a visit.