The Center for Urban Habitats finished surveying biota in the magnolia-pawpaw loop east of the quarries in mid-July. Among discoveries, a rare Piedmont hardpan ecosystem and large colonies of maidenhair fern. The report will be forthcoming.

In the meantime, planting in the galleries has continued much later than expected because—except for a dry patch in late July—we’ve had more rain than expected. A few notes from Devin:

Rachel and Jessie will be installing 250 Zizia aptera (Heart-leaved Golden Alexanders) in the Quercus circle (in the parking lot) today. This plant comes with a big benefit—it is a host plant for the black swallowtail (the featured photo shows the caterpillar snacking on one of our Zizia plugs). Many people plant Queen Anne’s lace, fennel, or other non-native carrot family species in their butterfly gardens to attract black swallowtails. Well, here’s a paramount example of one of the many native species that that butterfly utilizes. 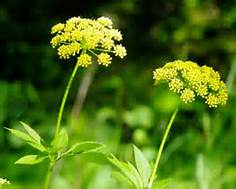 (Continuing . . . ) Expect Rudbeckia fulgida to give you a tremendous show in the Quercus circle beginning next week.

Among the newest arrivals will be hundreds of bluestem goldenrod and a hundred marginal wood fern. Around 500 little bluestem will arrive in a few days.

The nodding onion left of the viewing platform is glorious, and the prairie wedgegrass and poverty oat grass seeded last fall has launched from the surface of that clayey heavy metal soil. It’s quite amazing.

A glorious specimen of Sabatia angularis (rose pink; identified on survey last year) is blooming in the lower-left area of the Prairie. We must overseed this biennial in the fall. It will take two years to produce flowers, but when it does, it will be a late July show of color that no visitor will soon forget. 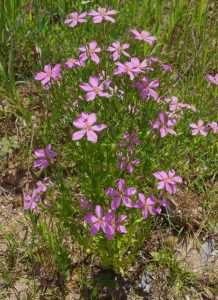 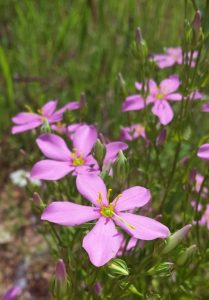 (Finally . . . ) The pollinator diversity and richness on the mountainmints (both short-toothed and hoary) around the viewing platform is impressive. Look for American lady, red-banded hairstreak, and juniper hairstreak presently, as they are fond of these Pycnanthemums.

This first picture shows the rebar pattern over which the heating tubes will be laid for our solar-powered radiant floor. 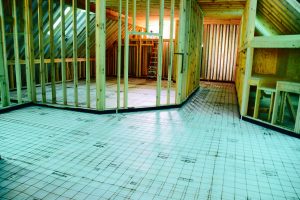 The second shows the rebar the heating tubes, and the beginning of the concrete pour.

The last shows the concrete being finished. 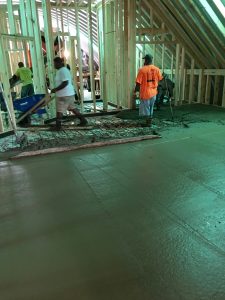