Not what you think…

Hikers at the QGs on a recent Saturday morning saw the remains of an enormous spider web stretched across the North Quarry wall trail, with what appeared to be a piece of lichen stuck in one corner. The featured photo of the spider en camouflage was taken (and shared) by QGs hiker Gerry Bishop. Closer inspection revealed the “lichen” to be a Giant lichen orbweaver spider, araneus bicenetenarius—an insect-trapper by night that employs camouflage to hide by day, reflecting what our consulting naturalist Devin Floyd calls “deep evolutionary time, and a ton of predation from reptiles, amphibians, and birds.” Harmless to humans, this one, about 2.5 inches long, was a female—males are much smaller. Here she is in a wider view. 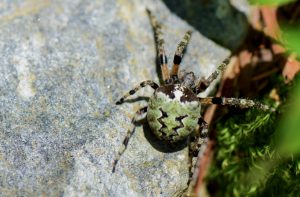 Orbweavers build a new wheel-shaped web each day, using trees or shrubs for support. After the night’s trapping/dining, they consume the web, rest awhile, then start a new one. Part of a large family of orbweaver spiders with many colorful variations, Giant lichen orbweavers are more common in the South, especially in Texas. This one was a first for the Quarry Gardens biota, which now includes some 600 species of plants and animals.

In deep camouflage—photo by Lynne Billman:

Bernice gets the credit for adding this one to our biota list, and I have to admit it’s classier than my last addition, the lowly worm snake.