A Good Year: Review and Preview 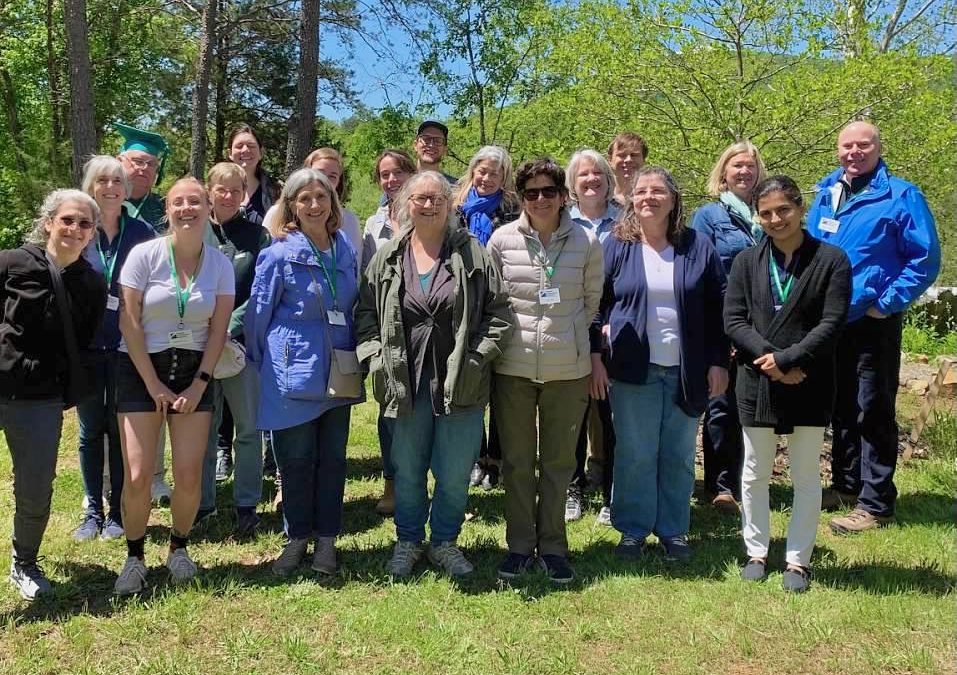 All things considered, 2021 was a good year at the QGs. Here’s the summary:

Visitors: Although Covid-19 had most organized groups still postponing in-person meetings, we hosted 99 events and more than 1,000 visitors between April and November.

Helpers: Our wonderful volunteers contributed more than 300 hours assisting the Center for Urban Habitats team with planting and grooming native plants and managing invasive species. Besides working with Rachel Floyd on Friday mornings, several volunteers monitor and manage favorite areas of the Gardens independently. Julie Farrell contributed 69 hours; Martha Donnelly, Ron Fandetti, and Taylor Randolph each logged more than 30 hours. Volunteers came from Master Gardener and Master Naturalist units of Albemarle and Nelson counties. Their work complements our own and that of two paid staff.

Friends: We rolled over 2020’s memberships to 2021, but many generous Friends contributed anyway, and the roster of 64 grew to 71 supporting the Gardens with membership fees, gifts in kind, and volunteer service. 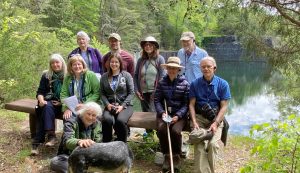 Virginia Native Plant Society President Nancy Vehrs brought members of her own Prince William Chapter to the Quarry Gardens in May. Skyla the dog photo-bombed.​

​​Explorers: This new category of membership, which gives access to nearly 13 miles of trails through the remainder of the 600-acre property, has added 11 Explorer Friends who pay $200 per season or volunteer 40 hours. Explorers may visit most anytime, year around, and follow the trail map up the mountain and along the ledges above the Rockfish River. By request, qualified persons also may have access to the trails for research. Observations may be recorded at: https://www.inaturalist.org/projects/quarry-gardens-biodiversity

Publication: Seasons at the Quarry Gardens joined the shelf of books available for purchase in the Visitor Center. Its 48 pages lead readers on a photographic tour of the gardens through the four seasons. It also includes maps and descriptions of the natural communities and the planted galleries. Written, compiled, and designed by Bernice Thieblot with assistance from CUH’s Devin and Rachel Floyd, Seasons is also available by request via the website’s Contact.

The North Quarry Bridge made a fitting stage for splendid performances by Katy Ambrose on horns, and percussionist I-Jen Fang.

The audience for Soundflight followed the program by following the main trail.

Research: William & Mary professor of geology Chuck Bailey led a team of five graduate students on a study of the QGs and the Schuyler area during the hottest part of the summer. Their project, to create a 3D map of the underlying geology, funded by the U.S. Geological Survey, resulted in an impressive report that Chuck has offered to present at the QGs in the spring. The Blue Ridge Mycological Society continues to meet and foray here monthly, adding new fungi species to the QGs biota and sharing data with the North American Mycoflora Project. The native lawn study plots may yield findings in 2022; Ron Fandetti has helped CUH monitor and manage them.

Bluebirds are social animals, except during nesting season when they will try to remove their own images from car mirrors.

Wildlife: A record 48 bluebirds fledged from the nine nest boxes at QGs and on the adjoining conservation site. Near the end of the season, we placed more boxes, bringing the total to 16. Master Naturalist Gareth Hunt, who volunteers for the Bluebird Society, monitors the boxes throughout the nesting season. For the second year, we had fox kits born in the boulder pile east of the picnic pavilion.

Plant sharing: We were pleased to again have a team from the non-profit Little Bluestem Nursery visit to gather seeds; unfortunately, so voracious were the deer this year that they had less to choose from than previously. The 2022 spring sale of the Jefferson Chapter of the Virginia Native Plant Society will include plants propagated by member Will Shaw from seeds collected at the Quarry Gardens.

Media: In April, Cville Weekly featured Rivanna Master Naturalists’ use of the QGs as a volunteer certification training site. The June issue of the Ecological Landscape Alliance newsletter featured an article by Cynthia Wood. Soundflight was covered by The Daily Progress and NPR. The summer issue of Smith Mountain Laker magazine featured a lengthy article by Catriona Erler. An article by Clover Carroll appeared in a September issue of The Crozet Gazette.  In October, Charlottesville NPR affiliate WVTF featured a RadioIQ interview of the Thieblots by Sandy Hausman. These stories may be found linked to the blog archive at quarrygardensatschuyler.org.

Recognition: In December, we were delighted to receive an award for the QGs’ adaptive re-use from Preservation Piedmont in a ceremony at Ash Lawn.

In the coming year, we look forward to:

Having cell service: Armand’s long campaign succeeded. Verizon will start building on land adjacent to the QGs in January, aiming to complete the tower by March.

Seeing more flowers: The deer exclosure constructed to protect and show our most vulnerable plants was so successful at demonstrating the difference between deer and no deer that we have contracted to have more than a mile of 8-foot fencing constructed around the planted areas in time for spring opening. 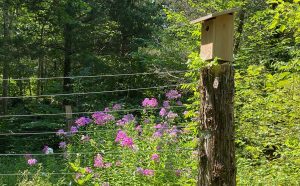 Native Summer phlox blooming within the deer exclosure convinced us to exclude deer from all the planted areas.

A roster of talented guides: We are cultivating volunteers to lead special-interest tours for native plant enthusiasts, gardeners, birders, mycologists, herpetologists, odonata enthusiasts, artists, and photographers. Please let us know if you would like to join and guide.

Seeing many more visitors—as soon as possible. And finding more ways to realize the potential of this magnificent site.