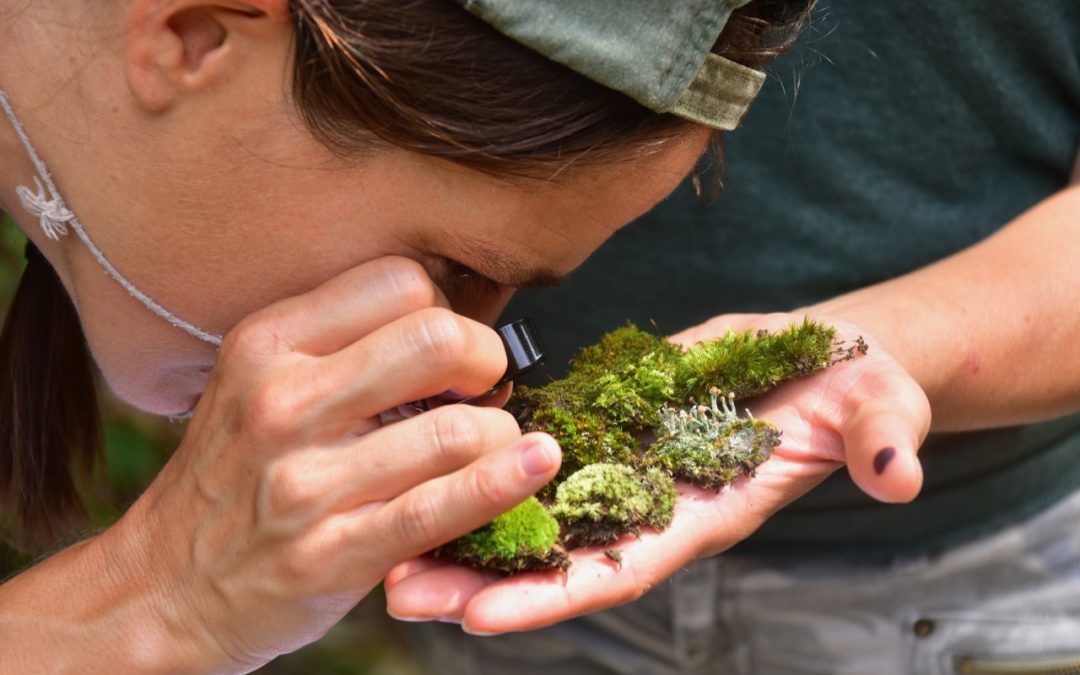 September 24, 2019. Who would guess that The Quarry Gardens parking lot islands could be a biodiversity hotspot? Devin Floyd, that’s who. Several weeks ago he brought a team from the Center for Urban Habitats to take a close look.

They marked off six 100-meter plots and went over them inch by inch. Summing up their findings, Devin said, “Among all plots we’ve done over the years, these produced more species per square foot than any other, and they were in the top 10 for Diversity index when compared to all other survey plots we’ve done in the region.” In the photo, Mary Jane Epps studies mosses held by Rachel Floyd. (One new find: Atrichum angustatum, Slender starburst moss.)

The team found 300 species of flora—including trees, vascular plants, and mosses—and confirmed the identities of 283. Forty-seven were new to the Quarry Gardens; nine were Nelson County records.

Devin reports: “Of the new records, the most important species are Calystegia spithamaea ssp. spithamaea (low bindweed) and Vitis cinerea var. baileyana (possum grape). Both are mapped sparingly in Virginia, and the bindweed is a fairly rare species reported from only one other county in VA.”

Caption: Among Paw paw seedlings, Devin and Mary Jane sift through fallen leaves. Average number of species within a plot: 95.

These findings bring the total of naturally occurring flora at QGs to 551 of which 56 have been Nelson County records. Planting in the Galleries of about 100 species native to the immediate area but not naturally occurring here brings the QGs flora total to about 650. Add 301 fauna, and the QGs are home to more than 950 species—that we know about. The complete list of species (the Biota)—along with lists for the designed Galleries—may be found linked to the Gardens page at quarrygardensatschuyler.org.

Caption: Drew Chaney scans the ground while Rachel records. Along with camera and binoculars, Drew had the Flora of Virginia app at hand. Others on the team: Odonate expert Emily Luebke and Devin’s daughters Eva and Norah Floyd who helped find critters.

Thanks to the survey, we now have data to identify the parking lot area as a combination of Southern Piedmont Hardpan and Ultramafic Woodland/Savanah. And it seems we have an emergent grassland that retains some of the old biodiversity typical of this part of Virginia a few hundred years ago.

Now, Devin says, we should wake up the dormant seed bank with some light controlled fire, and  forest thinning. A burn is planned for this winter and, with help from our resident forest manager Forrest McGuire, we have already begun culling red maple and beach saplings in the forest around the perimeter of the parking area. This will increase light reaching the ground and allow for the natural community that is hiding there to emerge. It’s called “breaking the edge” in ecological restoration.

In a few years, we expect more county records.