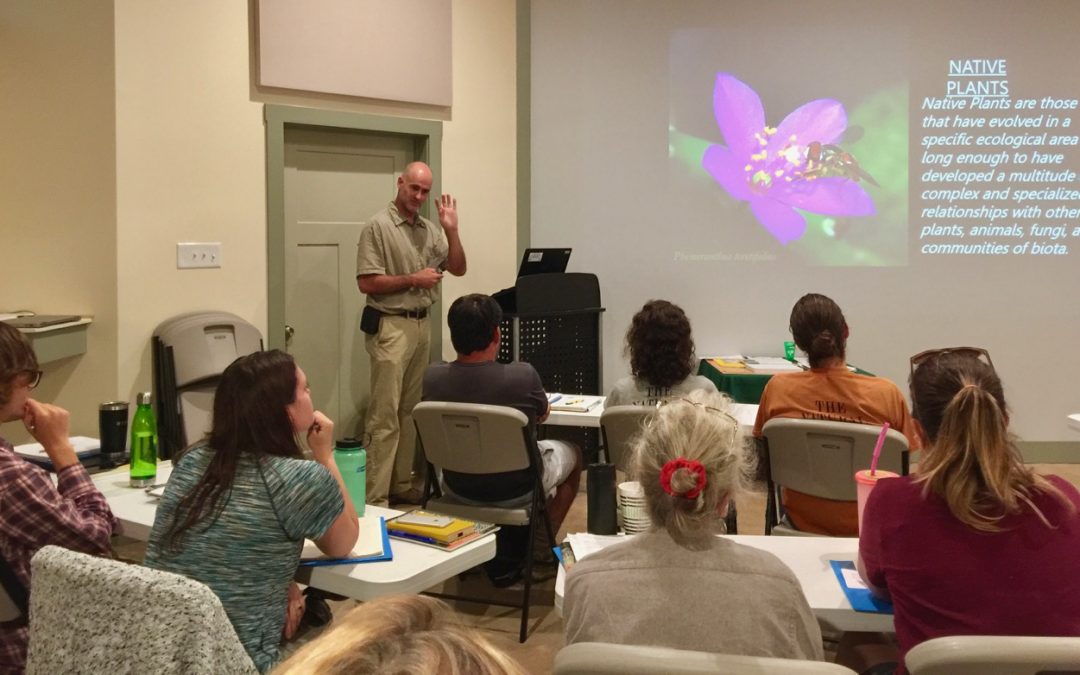 A beautiful day last Wednesday at the Quarry Gardens for a continuing education workshop on Ecosystem Modeling, sponsored by the Virginia Department of Game and Inland Fisheries (DGIF) and led by Devin Floyd of the Center for Urban Habitats (CUH).

The 25 landscape professionals in attendance came mostly from Virginia but also from parts of Maryland. Representing various specialties related to landscape design and management, they spent much of the day working in multidisciplinary teams. The three people standing are helpers with online research (l to r) Carol Heiser, DGIF; Rachel Bush, CUH; Devin Floyd, CUH. 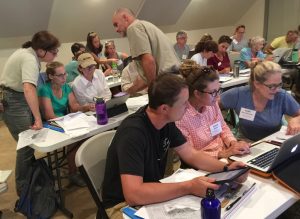 At the confluence of three Virginia ecoregions and a river, including areas both disturbed and undisturbed, the QGs site presents a wide spectrum of ecosystems. The day’s  theme—Using Natural plant Communities as Models for Landscape Design—took participants from the Visitor Center’s classroom outside to analyze a disturbed site back of the Quonset hut, to find indicator plants in old forest remnants near the parking area, and to see a newly established prairie thriving over a former dump site. In these settings, they were able to  observe and try the research methods of ecosystem discovery and modeling, and to see its benefits. Here are two photos of members of the group finding clues in rocks, soil, and plants in a recently disturbed area back of the Visitor Center: 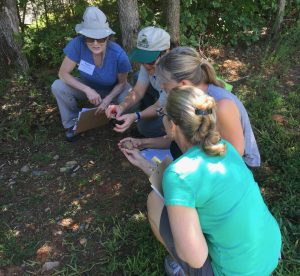 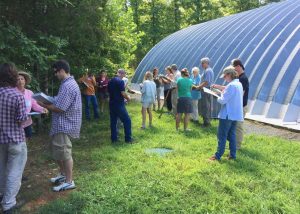 A few even had energy left at the end of the day to walk the main trail and see the quarries! We were happy to host the day, and hope that the QGs might be the inspiration and location for many more such educational  events. 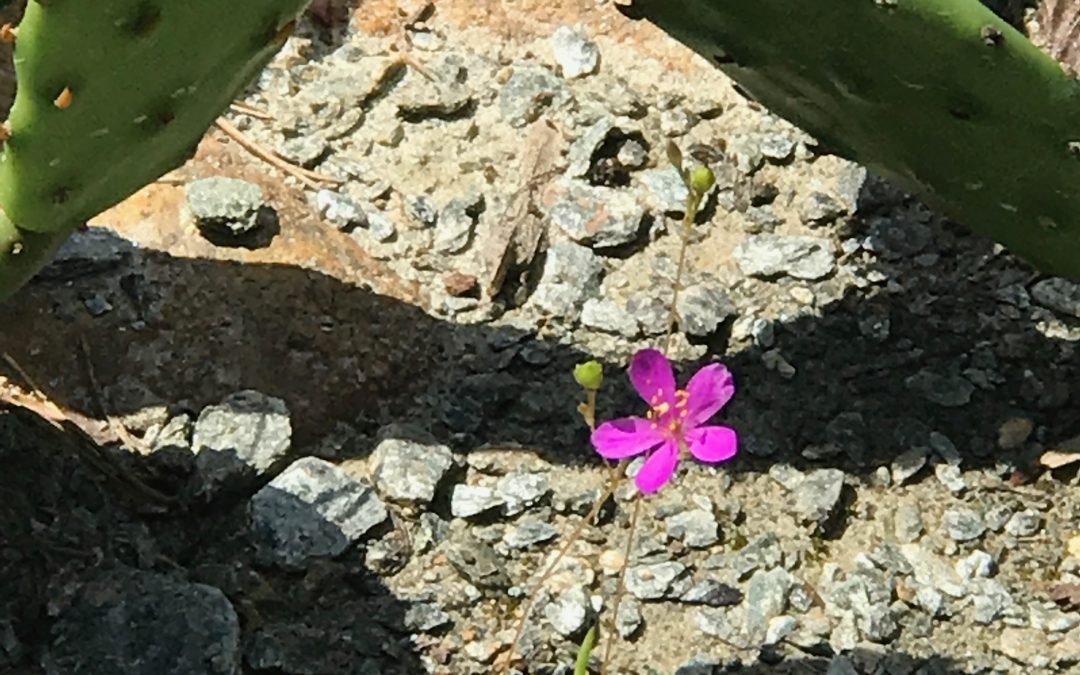 The two topics of this week’s blog are the ephemeral Quill fameflower and the much more durable Great Stone Head. Ephemeral first: The Quill fameflower (Phemeranthus teretifolius) is a member of the Portalacacae family (and one of the eighteen varieties of Miner’s lettuce). It is one of my favorite flowers at the Quarry Gardens. We have it in two places, growing in dents in the asphalt patch at the start of the tour where is also found the Eastern prickly pear cactus, and on top of the sitting rock at the overlook platform where it grows in ¼ inch of gravel in a slight depression. From its portulaca-like basal leaves, it sends up slender stalks that top off in insignificant buds of brown, green, or fuchsia. 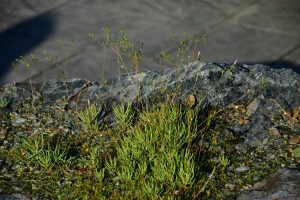 Then, on some sunny afternoon, one or more of those buds will blossom into a gorgeous little red-purple flower ¾ of an inch across that will last for only a couple of hours, its entire life cycle. The blossoms are so ephemeral that they have to be self-pollinating (although they are sometimes visited by opportunistic tiny bees), and unlike the great majority of native plants, have no known medicinal or nutritive use. One day I managed to catch a bunch of them blooming at once, a rare sight. Here are those I found on the sitting rock. 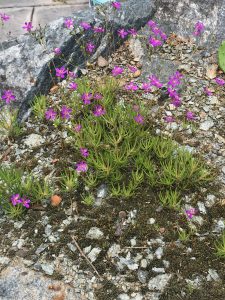 Here are others in the asphalt by the prickly pears. 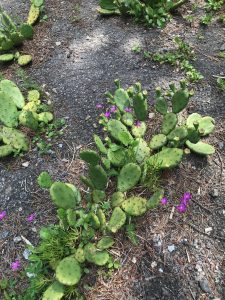 Second subject: The Great Stone Head. A few months ago Bernice and I toured the Alberene Soapstone plant here in Schuyler, now a part of Polycor, Inc., a Canadian firm that also owns Georgia Marble Company where Schuyler soapstone is now processed into (mostly) kitchen countertops. In front of one of the industrial buildings was laying, almost out of sight, a slightly larger than life-sized stone head roughly carved out of soapstone. I asked about its provenance, and was told no one really knew. I suggested to Chadd Minor, the quarry foreman, that if the company ever decided to get rid of it, I would admire to have it for the Quarry Gardens. A few weeks later it arrived, along with its base, at our Visitors Center. Although deceptively heavy (upwards of 400 pounds), Frankie and Warren Graves managed to manhandle it to its new location at the last overlook of the north quarry pool, where, in my view, it looks great. 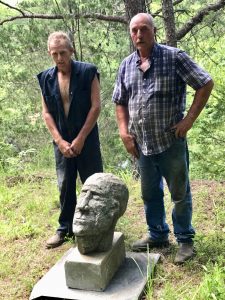 Chadd said he’d try to find out something about its history, but for the moment, it’s still an intriguing mystery. 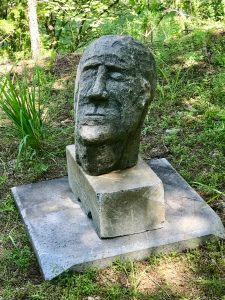 Bernice feels that from some angles, the jutting chin makes him look like FDR, and threatens to give him a cigarette in a holder.