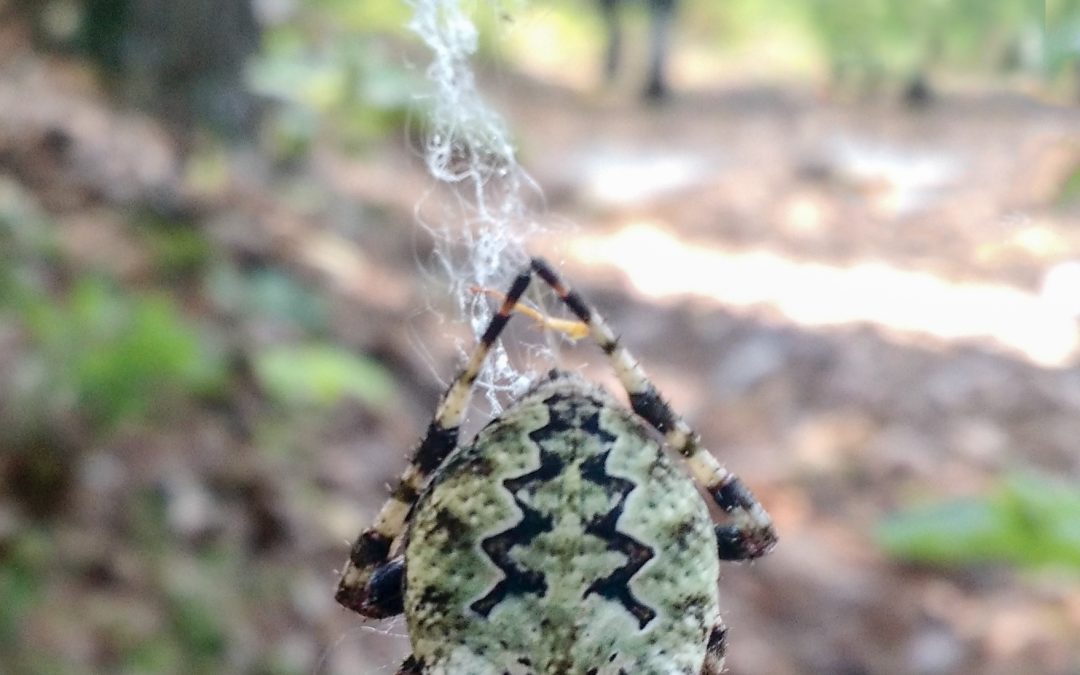 Not what you think…

Hikers at the QGs on a recent Saturday morning saw the remains of an enormous spider web stretched across the North Quarry wall trail, with what appeared to be a piece of lichen stuck in one corner. The featured photo of the spider en camouflage was taken (and shared) by QGs hiker Gerry Bishop. Closer inspection revealed the “lichen” to be a Giant lichen orbweaver spider, araneus bicenetenarius—an insect-trapper by night that employs camouflage to hide by day, reflecting what our consulting naturalist Devin Floyd calls “deep evolutionary time, and a ton of predation from reptiles, amphibians, and birds.” Harmless to humans, this one, about 2.5 inches long, was a female—males are much smaller. Here she is in a wider view.

Orbweavers build a new wheel-shaped web each day, using trees or shrubs for support. After the night’s trapping/dining, they consume the web, rest awhile, then start a new one. Part of a large family of orbweaver spiders with many colorful variations, Giant lichen orbweavers are more common in the South, especially in Texas. This one was a first for the Quarry Gardens biota, which now includes some 600 species of plants and animals.

In deep camouflage—photo by Lynne Billman: 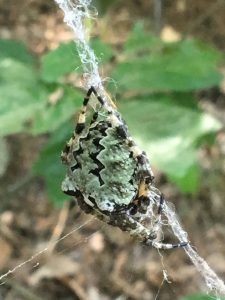 Bernice gets the credit for adding this one to our biota list, and I have to admit it’s classier than my last addition, the lowly worm snake. 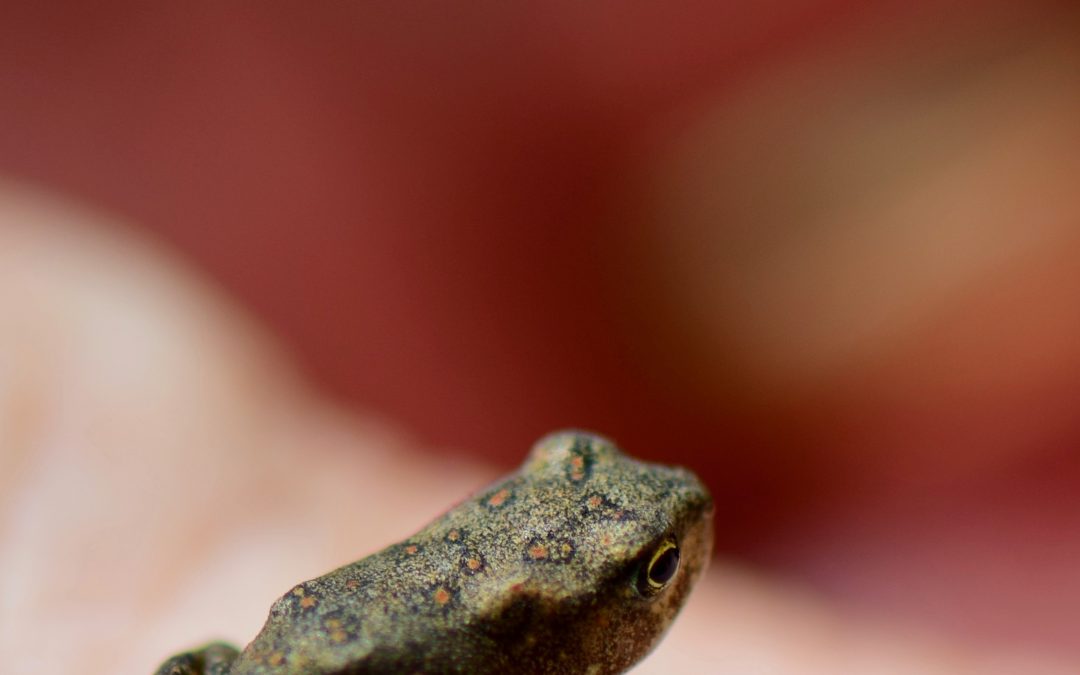 Doing our bit to add to the Web’s vast store of misinformation, we incorrectly identified the tiny creature in yesterday’s post as a cricket frog (which we also have at QGs). This one is not a different colored cricket frog—it’s a half-inch-long baby toad (that comes from an even smaller tadpole): either an American toad, Anaxyrus  americanus, or Fowler’s toad, Anaxyrus fowleri—too young to have warts. Its call is a long “waaaaah” —like most toads. Thanks go to Devin Floyd, of the Center for Urban Habitats, for setting us straight.
Here is CUH’s photo of one of our cricket frogs from last summer—and Devin says they do vary wildly in pattern and color. Curiously, the frog has warts, whereas our toad does not. 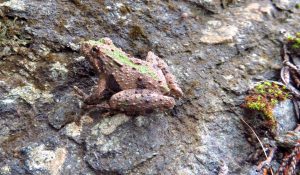 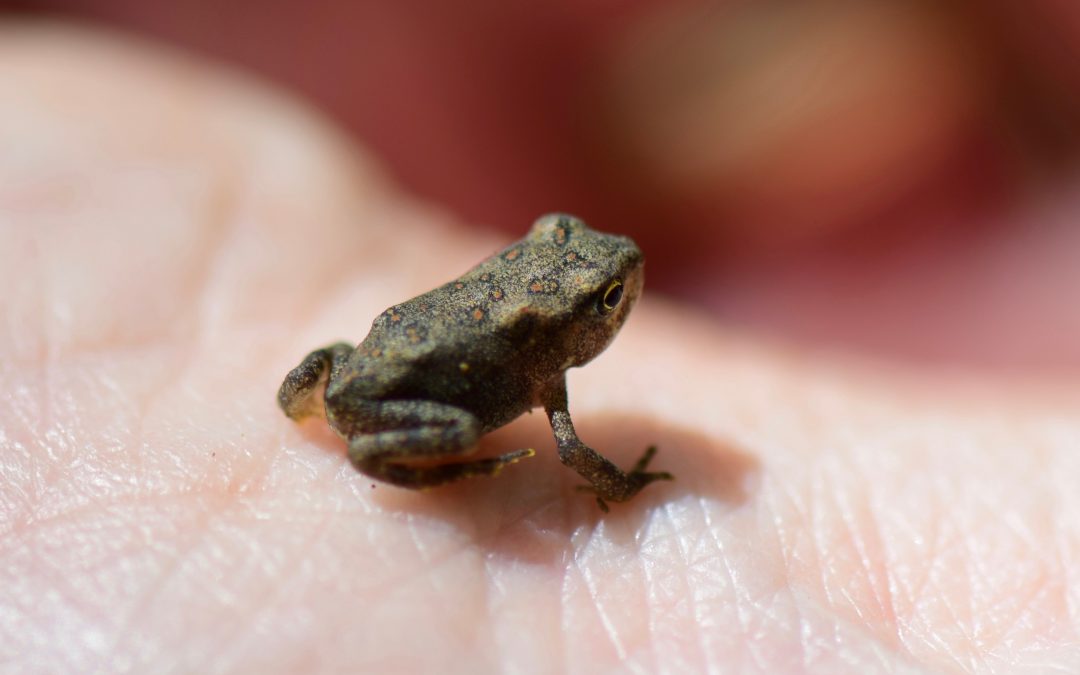 Tiny Northern cricket frogs, Acris crepitans, are plentiful and active now along Quarry Gardens trails. America’s smallest vertebrate, this cricket frog may leap up to three feet in a single jump. The featured photo shows one, about half an inch long, posing on the palm of a Quarry Gardens trail hiker. Their patterns vary; many have a green Y-shape on the back and a triangle on the head; this one has black-bordered red-orange spots—cute as a spotted frog. It’s tempting to think of them as “babies” but, of course, baby frogs are tadpoles. If you hear calls that sound like marbles clicking together, you’re hearing cricket frogs. 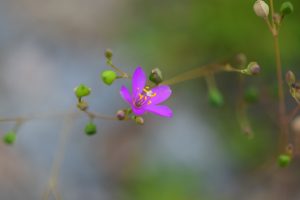 Tiny and elusive is the Quill fame flower, Phemeranthus teretifolius, pictured above at about twice life size. Related to portulaca, whose leaves it resembles, it grows in thin, dry soils—at the Quarry Gardens, through a patch of asphalt near the Visitor Center, and in a half-inch of gravel on a rock at the overlook platform. Sporadically, a 6-8-inch flower spike produces brilliant half-inch fuchsia blossoms that bloom for about two hours in the afternoon—after which each new flower fades away. So ephemeral are they that not much is known about them. And so elusive of pollinators are they that, lacking them, they self-pollinate. 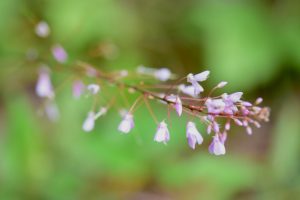 Tiny and charming are the slender leafless flower wands of Naked flowered tick trefoil, Hylodesmum nudiflorum, along QGs trails this week. Scattered through the dry woods, they are a native in the pea family. More familiar may be their seeds: those flat little green ​triangles that stick like Velcro to socks and pants legs in late summer. Come and let us send some home with you.