Sorry for the delay in the update. Things have, indeed, been happening but I’ve been unsure of how to set up the narrative and pictures for inclusion in the website. Next week, Sara, who is the webmaster, will spend a day showing me how to do that, after which I hope to be more diligent. In the meanwhile, here are some photos of what’s been abuilding: 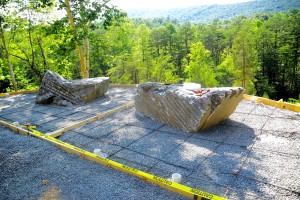 More preparations for pouring concrete for the viewing platform.

Here it is with he concrete poured but without the railings, that Charles Edwards and Dean Duncan will be adding: 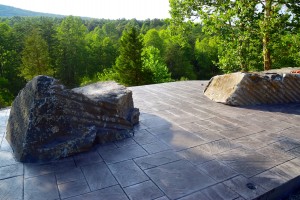 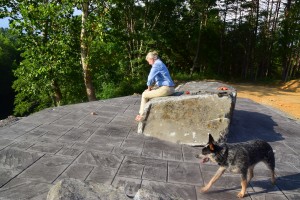 The path round the south quarry has to descend about 20 feet through a rock pile, so the plan is to rearrange some of the rocks into “natural steppingstones” (the original plan to rearrange some of the rocks in such a way construct a wooden stair was abandoned as too fussy and not natural enough; stonemason Pete and his men attempted a formal rock stair, but that was abandoned also as too formal looking. The current plan is to fit in found rock in such a way as to allow non-lethal descent but to appear to have been naturally caused; it has been only partially populated to date. 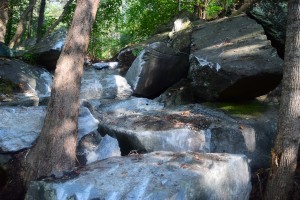 Rockfall blocks being rearranged for steps.

Back up on top, a wall has been erected marking off a bus-parking pad and walls have been erected around the “parade grounds.” 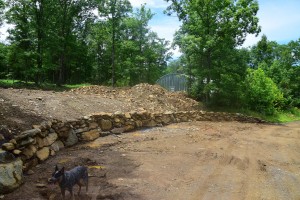 (Sorry, I’m still new a this picture alignment thing in WordPress, which works differently from every other positioning program I’m familiar with. Those are supposed to be side by side, but I’ve already put over a half-hour into trying to make it so, and I give up for the moment.)

In addition, we have been getting some publicity (see references elsewhere on the website) and making some appearances (one, anyhow) at mater gardener functions, and Devin Floyd and his crew have started to do actual plantings.